The Company’s Anti-Union Campaign is a Sham. 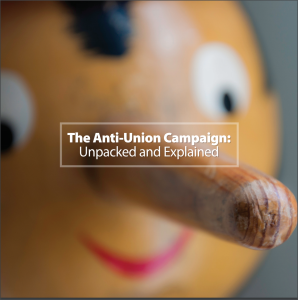 Now that you and your co-workers have expressed interest in
forming a union, it’s a pretty safe bet your employer is going to start
spending crazy amounts of money on an anti-union campaign.
Sadly, the first thing they will probably do is go out and hire an
overpriced anti-union law firm that has never met you and knows
nothing about you. Despite this, they’ll try and convince you it’s
in your best interest to keep things just the way they are. Then
come the lies, misleading statements and smear tactics. Oh yeah…
and meetings… lots of meetings! We know this because it’s the
playbook almost every company resorts to when they see their
employees standing together for a better life. The bottom line is
management’s anti-union campaign is meant to create a lot
of noise and distract you from the real reason you are joining
together in a union—there are problems at your worksite that
only a union negotiated contract can fix. In the coming weeks, you can expect management to rehash some of the same old tired topics union busters have been harping on for years. Certainly there are better ways they could spend their time and money. Treating the workers who keep the company profitable with the respect they deserve would be a start. This booklet is designed to prepare you for what is likely to come during your campaign to form a Union. There will be some minor variations, but the method and the message will almost always be the same.

Learn all about management’s anti-union tactics by checking out The Anti-Union Campaign: Unpacked and Explained

The Anti-Union Campaign: Unpacked and Explained